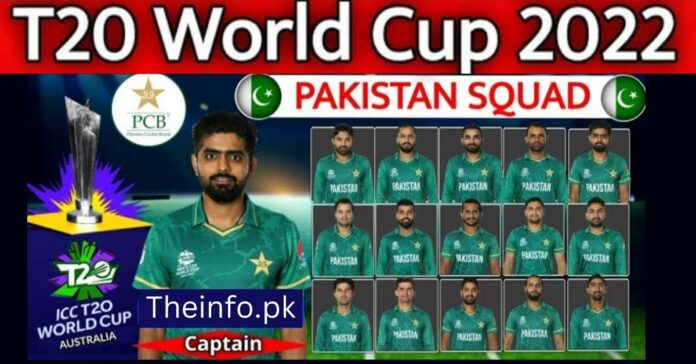 Pakistan will join India, South Africa, and Bangladesh in group 2 of the International Cricket Council (ICC). Melbourne Cricket Ground will host its first match on October 23.

Pakistan cricket team’s performance at the last ICC T20 World Cup was phenomenal. The team played outstanding cricket throughout the tournament, even though they didn’t reach the final. They won group 2 of the super 12.

The Pakistani team has a great chance to avenge its semi-final loss to Australia. We aim to find Pakistan’s probable T20 World Cup squad this year.

A 15-man Pakistani squad has been announced for the 2022 T20 World Cup. Shadab Khan will be the deputy captain to Babar Azam, who will be leading the squad as captain.

In order to help Shaheen Afridi recover from his injury, he has been included in the squad while he recovers. A pace battery comprised of Muhammad Wasim Jr., Haris Rauf, and Naseem Shah has been completed.

As a result of a knee injury that caused him to be ruled out of the squad, Fakhar Zaman is not included in the squad. His place has been taken by Shan Masood, who has been called up for the first time in his career to the T20I squad.

It is Babar Azam who captains Pakistan in all three formats. World’s top T20 batsman at the moment. In World Cup 2021, he will captain the Pakistan team.

Prior to the last world cup, Pakistan appointed former Australian opener Mathew Hyden as a coach for this year’s competition. Currently, they are coached by former Pakistan spinner Saqlain Mushtaq.

Team Pakistan is led by Babar Azam, Pakistan’s most consistent and reliable T20 player. In crucial situations, Babar Azam can also lead his team. The special team was captained by Babar Azam at the T20 World Cup 2021.

The Pakistani T20 World Cup Team 2022 is most likely to include these players. Their top order, especially the openers, is always their batting lineup’s backbone.

In the first innings, wicketkeeper Mohammad Rizwan will open with captain Babar Azam. They had a successful opening pairing. World’s top two T20 batsmen are Babar and Rizwan according to the ICC rankings.

These two players are both class players. With batting powerplay, they can start every match with a bang. Neither of them can play beyond the fifteenth to sixteenth over, so Pakistan will dominate. During his debut campaign, the batsman also showed consistency. A half-century was made four times. Four half-centuries were scored.