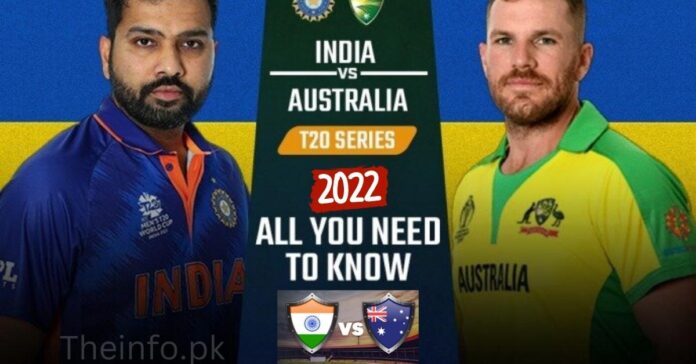 The schedule and squad for the Indian vs Australian T20 match in 2022. Details on IND vs AUS T20 match time, tickets, venue, squad, live streaming channel, and live telecast location in India.

New Zealand lost 3-0 to Australia in their recent ODI series. Last T20I series against Sri Lanka was in June 2022. During the three-match series, Australia won two and lost one. The series ended 2-1 for them.

An unresolved match took place in one of the matches. In the seven matches Australia has played in India, the team has won three of them and lost four of them. First T20I series between India and Australia since December 2020, when India won 2-1.

The IND vs AUS T20I series squads have been announced. Rohit Sharma leads India in the series. Aaron Finch leads Australia. There are no Arshdeep Singh, Mohammed Shami, or Ravi Bishnoi in the Indian squad. David Warner and Mitchell Starc are absent.

Where To Watch IND vs AUS live T20 Match In Australia?